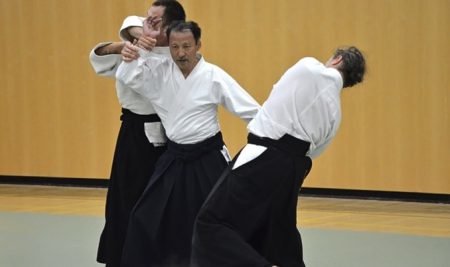 Today’s Groupon Vancouver Daily Deal of the Day: Vancouver West Aikikai: 50 for Aikido Classes. Three Options Available (Up to 69% Off)

The Fine Print
Promotional value expires 120 days after purchase. Amount paid never expires. Not valid for clients active within the past 6 month(s). Younger than 18 must have guardian-signed waiver. Limit 1 per person, may buy 1 additional as gift. Valid only for option purchased. All goods or services must be used by the same person. Introduction classes are held from September 6th to 18th. Merchant is solely responsible to purchasers for the care and quality of the advertised goods and services.

Aikido: Fighting in Harmony
The style of fighting at this martial-arts studio isn’t really fighting at all. Read on to learn more about the peaceful philosophy behind aikido.

If trophies and medals are their only goals, then students will gain little from aikido instruction. If they seek greater harmony with the world around them, though, then aikido is their path. Composed of three Japanese characters—ai meaning harmony, ki meaning spirit or energy, and do meaning the way—the word aikido translates to “the way of unifying life energy,” and the martial art embodies this definition. The aikidoist attempts to harmonize with rather than confront an attacker’s movement—in other words, the preservation of the attacker is equally important as one’s own self-defense. The aikidoist learns how to take an aggressive line of force and convert it into a circular motion, applying wristlocks and throws that neutralize attackers without causing them to fall off any dangerous cliffs.

Morihei Ueshiba, known as O-Sensei to his followers, created aikido in the early 20th century as a response to his training in judo, kendo, and jujitsu. He felt spiritual unrest in arts that were based on victory over others and ended up developing a completely different discipline. Aikido training continues to embody O-Sensei’s vision of aikido as a pure martial art. There are no competitive tournaments, so aikido is not considered a sport, and dojos focus on cooperative training rather than endless sparring so that students are able to better themselves without belittling or causing injury to others.