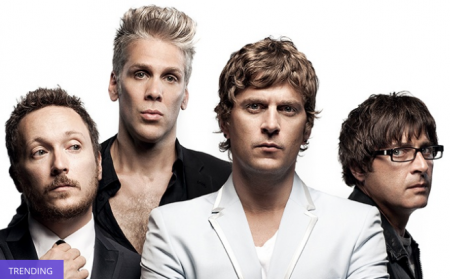 The Fine Print
Promotional value expires Jul 17, 2017. Limit 8/person. Refundable only on day of purchase. Must purchase together to sit together. Merchant reserves right to substitute closer seat. Disability seating cannot be guaranteed; contact box office prior to purchase for availability. Holder assumes all risk in connection with the event and releases Groupon, Ticketmaster, venue and their affiliates from any related claims. Not redeemable on mobile app. Ticket value includes all fees. Ticketmaster is issuer of tickets – discount reflects current ticket prices, which may change. Merchant is solely responsible to purchasers for the care and quality of the advertised goods and services. Offer is not eligible for Groupon promo codes or other discounts.

Matchbox Twenty
The Band: the internationally acclaimed alternative rock band composed of Rob Thomas, Paul Doucette, Kyle Cook, and Brian Yale
Why “Twenty” has special significance this year: October marked the 20th anniversary of the band’s debut album, Yourself or Someone Like You, which was certified 12X Platinum by the RIAA thanks to smash hits such as “Push” and “3AM.”
In that time… Matchbox Twenty has sold well over 30 million albums worldwide, penned #1 singles such as “Bent” and “How Far We’ve Come,” and received five Grammy nods
Counting Crows
The Band: Captained by enigmatic singer Adam Duritz, Counting Crows exploded onto the scene in 1993 with the multiplatinum August and Everything After, and have sold more than 20 millions albums since.
The Latest Album: Somewhere Under Wonderland, which debuted in the Top 10 thanks to singles such as “Dislocation” (one of Rolling Stone’s Top 50 Songs of 2014)
The Praise: NPR hails Counting Crows as “one of the most popular and easily identifiable rock groups in America”
How the frontmen describe touring with each other: with mutual affection. “I can’t wait to spend another summer out there on the road with the Crows,” said Thomas. For his part, Duritz said, “We took a vote after last year and decided to spend every summer with Rob from now on.”