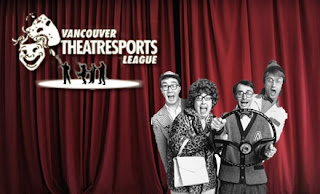 Today’s Vancouver Groupon Deal of the Day: $14 for Two Tickets to Any Scared Scriptless Show at Vancouver TheatreSports League on Granville Island ($28 Value)

This is a limited 2-day only sale that will expire at midnight on Wednesday, February 17, 2011. Click here to buy now or for more information about the deal. Quantities are limited so don’t miss out!

Today’s Groupon: for $14, you get two tickets to any Scared Scriptless show (a $28 value) at Vancouver TheatreSports League, located on Granville Island. Scared Scriptless begins on February 16 and runs every Wednesday at 9:15 p.m. and every Friday and Saturday at 11:45 p.m.

Vancouver TheatreSports League mingles the adrenaline rush of athletic events with the dramatic drollery of improv comedy to produce sidesplitting shows that are crafted on the spot for 60 minutes of audience-integrated outlandishness. Audience earthlings yell out suggestions as the multitalented improvisers ignite games and challenge themselves to bring laughter to your tears. Scared Scriptless’s comedic members cultivate the genre’s most admired styles while pushing envelopes into feral territory previously only trekked by wild yard gnomes and hyena nightmares.