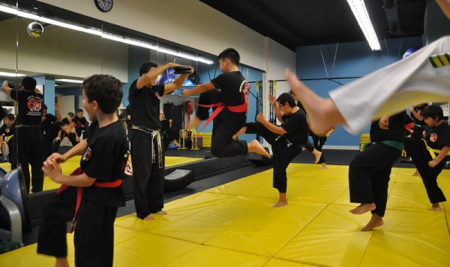 This is a limited 1-day only sale that will expire tonight at midnight (Thursday, October 12, 2017).

The Fine Print
Promotional value expires 180 days after purchase. Amount paid never expires. Limit 1 per person, may buy 1 additional as gift. Limit 1 per child. Valid only for option purchased. Appointment required; 24-hour notice required to attend class. Fine Print: Not valid for clients active within the past 12 months. Classes must be used at least once a week from redemption period. This voucher is valid for starting at a white belt. Not valid at the 385 N Dollarton Highway location on Wednesdays. Merchant is solely responsible to purchasers for the care and quality of the advertised goods and services.

Martial-Arts Belts: Working Your Way Up the Rainbow
Brand new martial-arts students begin with the blank slate of white belt. Learn where they go from there with Groupon’s look at martial arts belts.

There’s an old story about the evolution of the system of colored martial-arts belts: donning fresh white belts at first, trainees would let them darken over time with sweat and dirt, until, after years of increasing mastery, they turned almost black. If it sounds like a story that’s too good to believe, it almost certainly is. Although the belt system is conceivably an ancient tradition handed down from sensei to sensei, its origins can be readily traced to the early 20th century. That’s when Dr. Jigoro Kano was developing a new form of physical education for Japanese public school students: judo, a safer version of the jujitsu fighting style. Facing an influx of new students, he devised a hierarchy of colored belts to illustrate their progress at a glance rather than having to ask each one to fight him every day.

How quickly athletes move up the ladder will depend on the teacher, the dojo, and the style, in addition to their skills. They may advance by taking a formal exam with practical, oral, and written sections; they may be asked to spar with students in the next level to prove their readiness; or they may be awarded a different color belt because the old one clashes with their eyes. And in any discipline, tying on a black belt doesn’t mean you’ve made it. Instead, one might think of it as being inducted into an advanced training program. In karate, for instance, there are 10 grades of black belts, some of which require up to 10 years of study to attain.