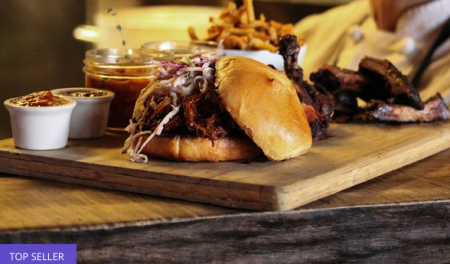 Today’s Groupon Vancouver Daily Deal of the Day: Buckstop: $28 for A Classic American BBQ Feast for Two: Valid Sunday–Thursday or $33 for Any Day (Up to 46% Off)

The feast includes fried pickles with chipotle aioli, hush puppies, and cornbread with cinnamon honey butter followed by a platter that contains a pulled pork sandwich, smoked chicken, a half rack of pork ribs, fries beans, and buttermilk slaw.

This is a limited 2-day only sale that will expire at midnight on Sunday, October 29, 2017.

The Fine Print
Promotional value expires 120 days after purchase. Amount paid never expires. May be repurchased every 90 days. Valid for dine-in only. Not valid for happy-hour specials. Reservation required. Limit 1 per person, may buy 1 additional as gift. Limit 1 per visit. Limit 1 per table. Valid only for option purchased. Merchant is solely responsible to purchasers for the care and quality of the advertised goods and services.

This late-night BBQ stop in Vancouver’s West End neighborhood has only been open a few years, but it’s already earned plenty of acclaim. Vancouver magazine awarded it as one of the neighborhood’s best eateries during its annual Restaurant Awards, while the Globe & Mail called it “a great Southern barbecue saloon” and praised its “immensely hospitable vibe.” The cozy, hunting-themed bar serves both classics (think Memphis-style ribs and hickory-smoked brisket) as well as more-adventurous BBQ dishes. Spain meets Texas with the pulled-pork croquettes, while the venison burger comes topped with caramelized onions and bacon. Pair your meal with a cocktail or a local draft beer.