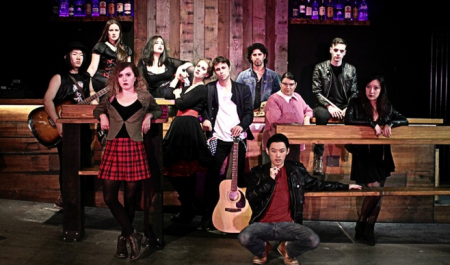 Preview performances are October 27, 28, and November 1.

The Fine Print
Expiration varies. Limit 8/person. Valid only for option purchased. Redeem on the day of the event for a ticket at venue box office. Refundable only on day of purchase. Must purchase together to sit together. Merchant is issuer of tickets – discount reflects current ticket prices, which may change. Disability seating cannot be guaranteed; contact Fighting Chance Productions prior to purchase for availability. Ticket value includes all fees. Parking not included. Merchant is solely responsible to purchasers for the care and quality of the advertised goods and services.

Bloody Bloody Andrew Jackson
Andrew Jackson, the United States’ seventh commander-in-chief and founder of the modern Democratic party, who still smirks on the $20 bill, receives a makeover as one of the nation’s founding rock stars during the musical comedy Bloody Bloody Andrew Jackson. The rollicking rock musical, which split sides on Broadway under the tagline “History Just Got All Sexypants,” induces contagious guffaws with its sharp wit and unyielding satire that “oozes political relevance,” according to USA Today. At roughly 90 minutes, the musical blares its first chords during Old Hickory’s early days on the Tennessee frontier. The guitar-driven production then follows the charming leader as he woos his wife Rachel and then the nation with a populist campaign that reaps an eight-year term in the White House.

Hardly a partisan parody, Bloody Bloody Andrew Jackson strives to cut party lines and analyze America’s emotional relationship with its leaders. The play points to past and present political figures who embody the charisma and petulance of a rock star, leading the New York Times to remark, “who better to lead this restless, appetite-driven creature [America] than a red-blooded rock star?”

With scenes that involve sexual innuendo and profanity, Bloody Bloody Andrew Jackson is not appropriate for children.