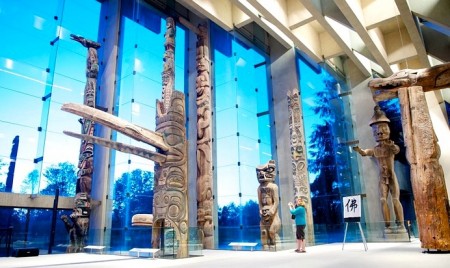 With today’s Groupon great deal to University of British Columbia Museum of Anthropology, for only $8.50, you can get University of British Columbia Museum of Anthropology Visit for One, $15 for Two, or $22 for a Family of Up to Six! That’s a saving up to 55% Off! You can stock up on the deal as you may buy up to 3 vouchers for personal use and 2 as gifts & the Promotional value expires Jan 1, 2017.

Exhibits include (In)visible: The Spiritual World of Taiwan through Contemporary Art, which runs November 20, 2015–April 3, 2016; In the Footprint of the Crocodile Man: Contemporary Works from Papua New Guinea, opening March 1, 2016; and Lawrence Paul Yuxweluptun: Unceded Territories, opening May 10, 2016.

The Fine Print
Promotional value expires Jan 1, 2017. Amount paid never expires. Limit 3 per person, may buy 2 additional as gifts. Valid only for option purchased. Limit 1 per visit. Tax included. Specific to Museum of Anthropology Admission only. Good for a one time entry. Merchant is solely responsible to purchasers for the care and quality of the advertised goods and services.

After more than 60 years, the University of British Columbia Museum of Anthropology could almost do an anthropological study on its own history, from its humble basement beginnings in 1949 to its present-day status as Canada’s largest teaching museum. Today, it is home to thousands of ethnographic objects—objects gathered from indigenous cultures around the world—including totem poles, silver, and masks from the First Nations. The array of artifacts from the province’s northwest coast is eclipsed only by the museum’s Asian collections, which transport visitors back in time with historical Cantonese opera costumes, ceramics, and paintings.