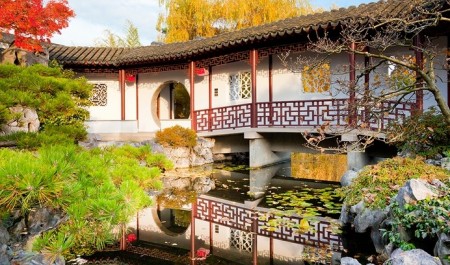 The Fine Print
Promotional value expires 120 days after purchase. Amount paid never expires. Limit 2 per person. Merchant is solely responsible to purchasers for the care and quality of the advertised goods and services.

China is famous for its breathtaking and meticulously landscaped gardens, the most famous of which were designed hundreds of years ago, during the Ming Dynasty. The ancient tradition is alive and well at Dr. Sun Yat-Sen Classical Chinese Garden, where guests will find the same signature symmetrical arrangements and winding paths popular on the other side of the world.

Yet the garden isn’t simply a recreation of the real thing—it was built by actual Chinese artisans from Suzhou, who constructed each walkway and hall in the traditional manner, using intricate joinery that does not require nails, screws, or glue. And, just like the gardens of a thousand years ago, the Dr. Sun Yat-Sen garden boasts a design that aims to strike a balance between four elements: rock, water, plants, and architecture.

The rock: The garden’s rock formations range from a man-made mountain at the center of the garden to a scattering of water-worn limestone boulders. The common denominator? They’re all imported from the Suzhou’s Lake Tai, down to the pebble.
The water: Jade green, due to the clay that lines the bottom of the garden’s pond. The hue is an intentional artistic choice, meant to enhance the pond’s reflections.
The plants: A blend of local plants and native Chinese ones, the garden’s collection of flora ranges from cypress to miniature rhododendrons. Clusters of three winter plants—pine, bamboo, and winter-flowering plum—stud the terrain, symbolizing strength and rebirth.
The architecture: Visitors can step into assorted pavilions, including The Han Bi Xie (Jade Water Pavilion), which appears to float on the surface of the pond. The water flowing underneath it also keeps it refreshingly cool in the summer.